It all started with an eye-dea!

The London Eye began as an entry to a competition in 1993 organised by the Sunday Times. David Marks and Julia Barfield, the renowned husband-and-wife architecture team, submitted their idea for a giant cantilevered observation wheel as a new London landmark to celebrate the millennium.

The wheel would stand on the south bank of the River Thames, towering over London’s skyline, and attraction where, as Julia put it, “the trip round is as important as the view”.

Nothing came of the competition, and no winner was announced. But David and Julia weren’t deterred.

Tireless work was done over six years, the couple worked tirelessly to make their dream a reality. They spent time and money investing in the very best technology available, including a state-of-the-art computer to model the Eye.

Hundreds of people across five different countries worked to get the Eye ready for the millennium.

The pods were numbered from one to 33, skipping 13 with superstitious passengers in mind. Each pod weighs ten tonnes, as much as one million pound coins.

On 13 October 1999, the 135-metre-tall wheel was erected – officially the world’s largest observation wheel. It was the culmination of Julia and David’s determination and incredible efforts, and an exciting new addition to London’s skyline.

On New Years’ Eve, the London Eye made its first full rotation. British Prime Minister Tony Blair set the wheel in motion, as millions lined the banks of the Thames to witness the spectacle.

On that night, David Marks’ and Julia Barfield’s years of hard work were finally brought to life. As the wheel rotated majestically, it ushered in the new century and a new chapter for the capital. 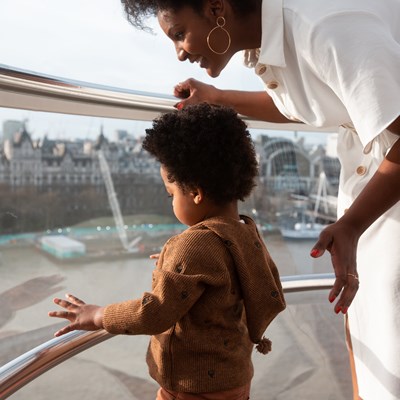 On 9 March 2000, the London Eye officially opened to the public. The lucky first passengers were competition winners and journalists. They all took a trip in one of the pods and soared above London’s skyline, marvelling at the breathtaking views from the top.

By 2005, the London Eye had officially reached the end of its five-year plan. It was due to be dismantled and moved from its iconic London residence. But the public just kept coming.

Indeed, the Eye had become the UK’s most popular paid attraction. So the Eye’s architects, Marks and Barfield, extended its lease in London, securing an incredible 25-year rental agreement with the Southbank Centre. 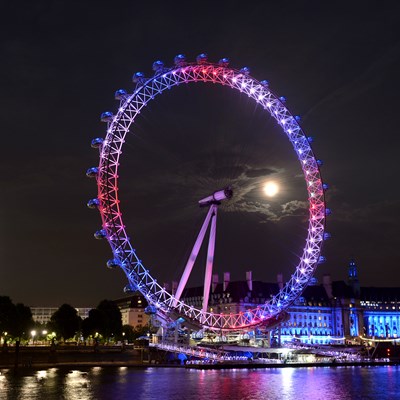 Let there be light

Up until 2006, the Eye was illuminated by fluorescent lights, but it was difficult to maintain them.

The wheel’s lighting was upgraded with Phillips’ Colour Kinetics LEDs – 650 controllable bulbs in total. The Eye could shine on as a beacon of colour along the London skyline.

In 2007, Tussauds Group took over British Airways’ stake in the Eye.

Merlin Entertainments vowed to transform every visitor’s experience at the Eye for the better. As owners of many of the UK’s favourite attractions, there was no better company to take on London’s most popular tourist spot. 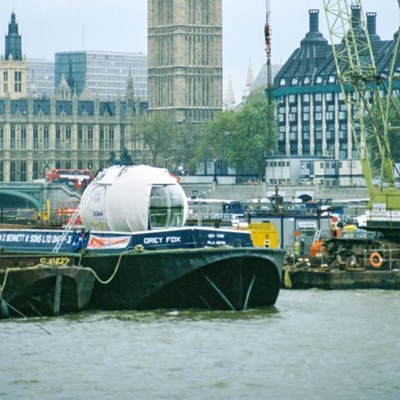 Time for an upgrade

Merlin Entertainments worked for several years to get the Eye ready for the 2012 Olympics. Starting with a makeover.

Each pod was taken down, floated downriver to the Tilbury Docks in Essex, and popped on the back of a truck to Worcester. There, each one was fitted with new heating, ventilation and entertainment fixtures.

Merlin also improved entertainment and facilities around the Eye, with a 4D cinema and shelter for waiting visitors, transforming the Eye into the wonderful destination we all know today.

In 2011, EDF Energy became the official sponsor of the Eye, renaming the wheel the EDF Energy London Eye.

Finally, the Olympics were here! And the Eye had an important role to play in the Olympic torch relay.

The world watched as Amelia Hempleman-Adams, the youngest person to ski to the North Pole, climbed out of a pod and stood on top, all while holding the Olympic torch. Amelia smiled throughout, unfazed by being 135-metres up in the sky. Now that’s Olympic spirit!

During the Games, the London Eye lit up in colour every time a British athlete won a medal. Great Britain won 65 medals in total – the Eye lit up in gold 29 times, in silver 17 times, and in bronze 19 times. A truly glittering display to honour our athletes. 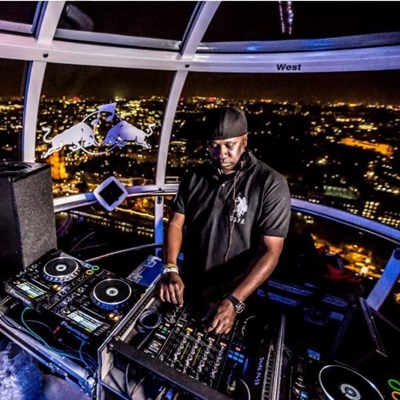 After the Olympics, it was a year of celebration for the Eye.

First off, we officially reached our 50 millionth visitor – an eye-watering number and proof that the wheel had become a true London icon.

Then, we helped Red Bull Revolutions celebrate 15 years of Red Bull’s Music Academy, with a massive party in each pod paying homage to UK club culture. Music royalty flocked to the Eye in their hundreds, from Lily Allen to Mark Ronson. And the spectacle was live-streamed on YouTube, getting over one million views.

But the celebrations didn’t stop there

The Royal Baby arrived! The Eye lit up in the colours of the Union Jack to send the biggest congratulations to the Duke and Duchess of Cambridge. 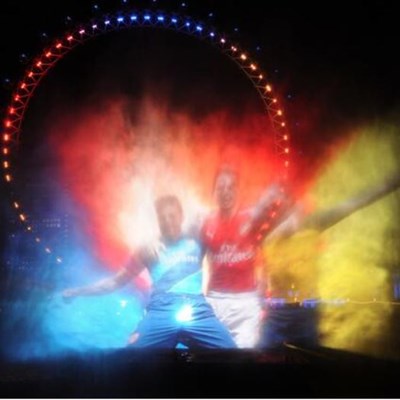 The campaign was launched on the Eye in 2014, as the presenters called on the public to get in the saddle to help wounded heroes and their families get their lives back on track

We celebrated the launch of Arsenal Football Club’s 2014/15 kits by revealing the PUMA kits with a breathtaking water projection across the River Thames. 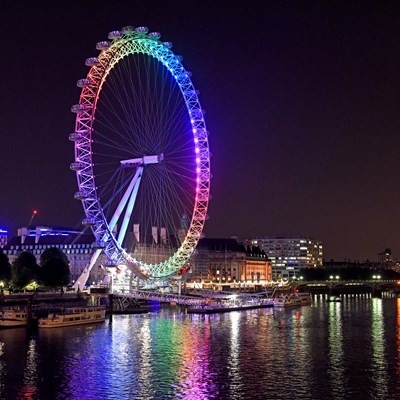 Time for a refresh

In January 2015, Coca-Cola took over as lead sponsor of the Eye, renaming the wheel the Coca-Cola London Eye. It was the ideal partnership – one of the world’s favourite brands and the UK’s favourite attraction coming together to celebrate happiness.

The Eye celebrated London’s LGBT+ community by lighting up in rainbow colours. It was the first display of its nature, showing how important diversity is to London’s past, present and future.

A Royally good cause

On World Mental Health Day, Prince William, Prince Harry, and The Duchess of Cambridge visited the Eye and invited mental health advocates to discuss their experiences. They spent the day sharing ideas on how to break down the stigmas surrounding mental health.

Harry attempted to spot his house in the skyline – not so tricky when you live in a palace!

To mark 100 days until the 2016 Brazilian Olympics, the Eye was illuminated in the country’s colours of blue, green and gold.

Much-loved British athlete, Mo Farrah, said a dramatic farewell to a career in athletics – on top of the London Eye!

The world tuned in to watch Mo do his iconic pose at the top of a rotating pod.

That’s what David Greenwood from Cambridge did – running 26.2 miles on a treadmill aboard the Eye. It took him three hours, 14 minutes and 26 seconds – a total of six and a half rotations.

David took on the challenge to raise money for Merlin’s Magic Wand: a charity that organises fun days for sick, disabled and disadvantaged young people. 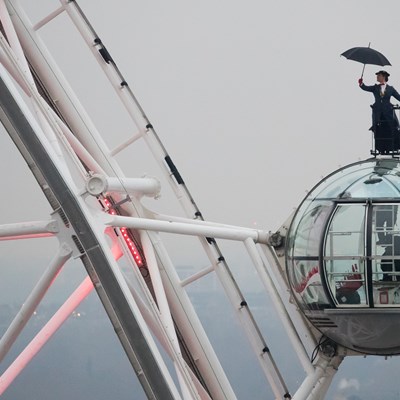 To celebrate the return of a London icon, a Mary Poppins stunt-double took a trip on top of a London Eye pod.

The actor recreated a famous scene from the 1964 classic. You might have spotted her famous umbrella soaring over London! 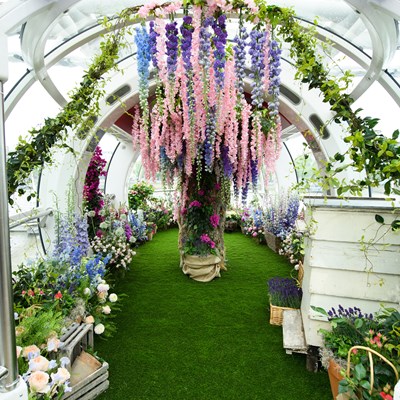 2019 saw the Eye change with the seasons. And first up was some flowers for spring!

As an ode to the RHS Chelsea Flower Show, a London Eye pod was bedecked with lots of beautiful blooms.

The aptly named capsule ‘A Gardener’s Eye’ featured a floral swing chair so lucky passengers could feel like they were flying as they soared into London’s skyline.

To mark the end of British Summer Time, The Eye rotated backwards for the first time. It was accompanied by a light show that transformed the Eye into a giant clock – lighting up a cold wintry morning in London.

A landmark for a landmark

2020 is an important year for the Eye – it’s our 20th birthday. So many amazing memories and moments have been made here over two decades, and we can’t wait to celebrate with you.

Since it was first built, the London Eye has welcomed over 76 million visitors and witnessed over 5,000 marriage proposals. In true celebratory fashion, it hosts London’s legendary New Years’ Eve firework display each year. Every day, memories are made here as the wheel keeps turning at London’s favourite attraction.

With its unrivalled views of Tower Bridge, Big Ben and St. Paul’s, the London Eye has added a modern sparkle to the breathtaking London skyline.

Without David Marks and Julia Barfield, the London Eye would have never come to be. Their passion, creativity and resilience is engrained in every bit of the Eye’s incredible design. It now stands as a beacon in the capital – representing the passage of time in a city that never stands still.

And we can’t imagine the city without it.